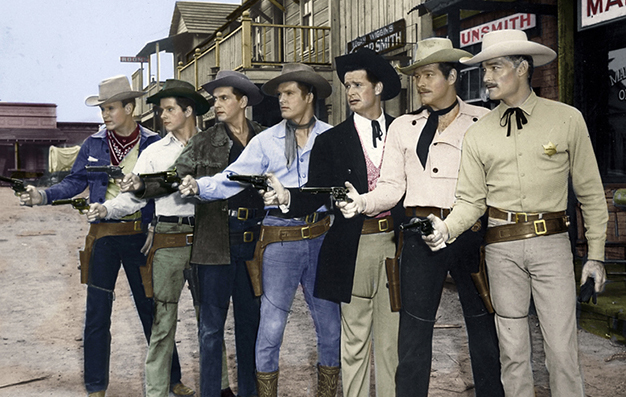 How to turn that finely tuned Precision Instrument into a battle scared Hunk-A- Junk in three easy steps Now I know this sounds pretty counter intuitive, but let me tell you it happens to more Colts than I care to mention. It all starts with our great love affair with TV Westerns. That’s the first place we all became acquainted with our beloved Peacemakers. Right up there on the screen we watched incredible feats of marksmanship and fancy gun handling. The very same movie stars taught us to both love and also destroy our favorite pistols. How’s that you ask? Well just sit down, relax and I’ll start from the beginning. It really doesn’t matter what era you grew up in. Whether you watched Hoppy and Gene at the Saturday Matinee double feature or “The Duke” and “Clint” on your color TV’s. We all got the same message. We not only desperately needed one or more of these western hoglegs, but we needed to be able to “Handle” them like our hero’s. Here in lies the rub. Those Colts we saw on the big screen were “fanned,” hit the rocky ground when the bad guy yelled “drop it mister,” and were shot way more than 6 times between reloads. Most were abused to the point that a gunsmith was hired with the sole purpose of keeping the guns that were used and abused running so that your favorite star always had at least one working to film with. Now the truth of the matter is, you can get away with that kind of stuff with your cap gun, but it can be very detrimental to the health and well-being of your real Colt Single Action.

The number one ailment of 1st Generation Colts and quite a few 2nd Gen Colts are broken hammer notches and trigger tips. This damage can be caused by dropping your cocked Colt on a hard surface when the bad guy yells “drop it mister”. But the most common mistake is when you try to out-draw the bad guy on the television and the hammer accidentally slips out from under your thumb while you’re clearing leather trying to execute that lightning fast draw. That’s when it falls to the half-cock notch just in time for you to level off that blaster and pull the trigger before your opponent does. You not only died because your gun broke, but you just did irreversible damage to your Hammer & Trigger. Mark one up for your TV hero. 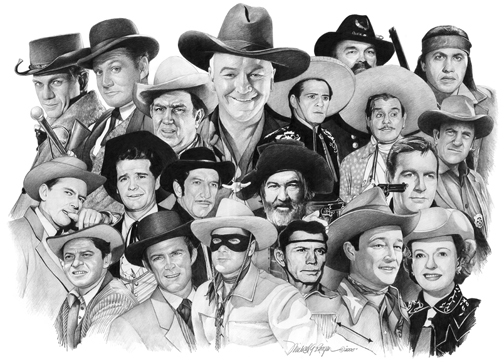 Number two is that nasty drag line around the outside of your nice new cylinder that lines up with the cylinder notches. You have to really look close to catch this one. But if you, like me tend to watch these westerns over and over you will see your hero load or unload the blanks from his Colt and let the Hammer down from the half cock position without drawing the hammer back to the full cock position first. What this does is let the locking bolt pop up against the cylinder halfway between the cylinder notches. That’s when he permanently scars that nice Colt cylinder with a ring as he rotates the cylinder back around to lock. Our TV hero was very considerate to teach us that one.

Number three – Fanning. Now we all know that the Colt Single Action can be fired very quickly, especially If you’ve seen the best cowboy action shooters at work. This is made easier if you’ve had an action job done like our “Gunslinger Deluxe Action Job”! It can be fired so quickly it rivals fanning speed. But hears the difference, fanning is what fast draw competitors do with highly modified pistols to set blindly fast one or two shot times with blanks or wax bullets. So if you want to fan like your favorite movie hero, I’d highly recommend starting with a Ruger, have it modified for fast draw fanning with a turned up hammer. Then you can out shoot all those movie villains. You will have a fun toy and won’t destroy the value of that prized Colt. You will come out ahead financially also! But the bottom line is this. A good Colt with a good action job can be fired by a highly trained shooter just as fast, and a whole lot more accurately than your TV hero can fan blanks all over the street of a TV set. Does it look cool? Of course. Does it break your Colt? Of course. Can you learn to fire your Colt as fast and accurately with a lot of training and practice? Of course. Now enjoy that Western with your favorite Peacemaker!