A Few Quotes From Satisfied Customers 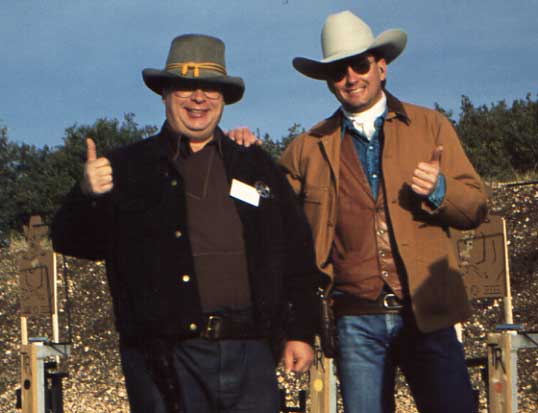 Dear Eddie: I need to say this about the Colt .45 you did for me with the 1880s package. Since buying my first Colt SAA in 1968 I’ve owned nearly 100, inclusive of all three generations. They have all been considered disposable by me to one degree or another if some other type of gun caught my fancy. They were replaceable.
Not so this .45 setting beside me at my writing desk. In fact I keep it here so I can feast my eyes on it often. Most true fans of the SAA consider 1st Generation ones as the ultimate in single actions. The lengths that the Colt factory went to in those bygone days to “finish” their single actions have been eliminated in modern times. I’m speaking of things like beveling on the trigger guard/backstrap bottom edges, end of ejector rod housings and fronts of the cylinder flutes. The beautifully color case hardened hammers have been absent for going on a century. Along the way Colt decided the long “Single Action Army” name and caliber stamp had to replace a simple “.45 Colt” on barrel’s left side. Now with your help my new .45 has all those features.
But: I must go on. Friends who visit get surprised looks on their faces when I tell them to try this .45’s action. It’s that buttery smooth and cylinder lock up is solid. I can’t even figure out how you accomplish that. The same is true of the fit of the walnut one piece grips – it’s perfect. Finally, there’s perhaps the most important point: beauty is as beauty does. A revolver this fine would still be second rate if it put its bullets elsewhere than where aimed. We both know how common that is with off-the-shelf SAAs. This one hits exactly where the sights are pointed.

I thank you immensely. I’ve never had a better Colt SAA. 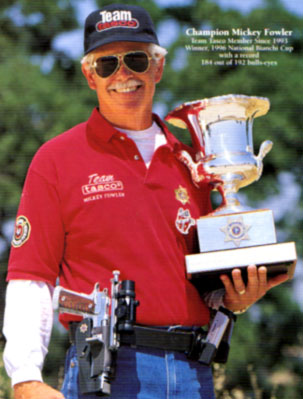 I’ve been a professional pistol shooter for over 35 years. Of all the guns I’ve shot and competed with, the pistol I lusted after most was the Colt Peacemaker.
My friend told me Eddie Janis was the master when it came to the model “P” and I wasn’t disappointed. I now have my “Dream Gun”.
Eddie put together a game plan to build the most accurate SAA by starting with a 2nd generation .357 mag., reaming the cylinder chambers to 45 cal with a perfect throat size of .452 for optimum accuracy. I then acquired a rare 45 x 4 ¾” barrel from Eddie and had him install it with minimum clearances. I had a Gunslinger Deluxe Action Job performed which gave my Colt that Swiss watch feel. My pistol now has the smoothest action I’ve ever felt, yet locks up like a bank vault. With a crisp 3 pound trigger pull, my Peacemaker is a true joy to shoot. Of all the many pistols I have in my safe, when I’m looking for pure shooting fun the first gun I reach for is my custom Peacemaker.
If you have ever wanted the ultimate Peacemaker built exactly to your specs I highly recommend Eddie Janis. 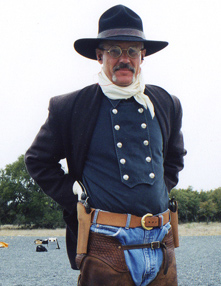 “I carry guns for a living and I use Eddie’s guns exclusively. Eddie’s action work is second to none and he diligently addresses the most important point of a firearm that the reliability is flawless! I am carrying one of his guns as I write this today. Had Eddie and I been around a hundred years ago, I would have carried his guns then. I do bet on them now and I would have bet on them then.” 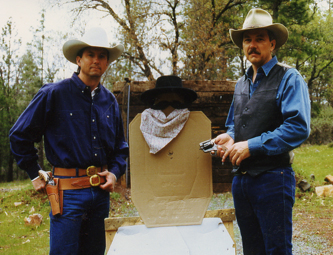 “It is unusual in this day and age to find a gunsmith who is a true specialist. Eddie is such a gunsmith. The single action Colt is his specialty and he knows it well. I wholeheartedly recommend Peacemaker Specialists for all your Model “P” needs.” 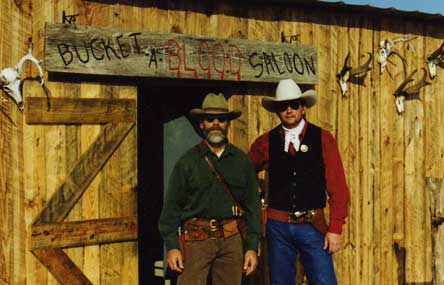 Eddie Janis is a craftsman and an artist with the Colt Single Action. The guns are smooth, accurate and dependable. 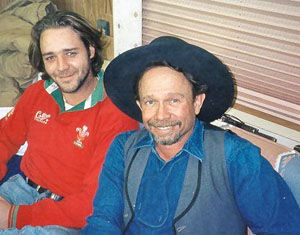 “Eddie, I wish you had been building my Colts when Jeff Cooper’s Leather Slap’and the other big ‘Live Ammo Fast Draw’ Matches were being held. I would have had a lot more time to practice. Your Competition Unloading Shoot is pure genius! Now it is guns for the motion picture industry. Your action work, and single action parts are the best.” 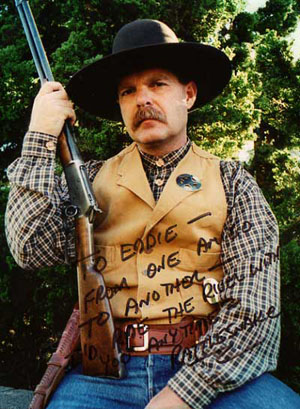 “Eddie’s ‘one at a time’ attention to detail when it comes to Colts is a rare commodity in today’s stamp ‘em out world. When you need something done just right, with no compromise in quality, workmanship or materials, look to Peacemaker Specialists. If you have a clunker you need brought back to life, or a once in a lifetime dream gun in mind, Peacemaker Specialists can make it happen and the results will be exactly, precisely what you had in mind.
“No one else works on my Colts. Period.” 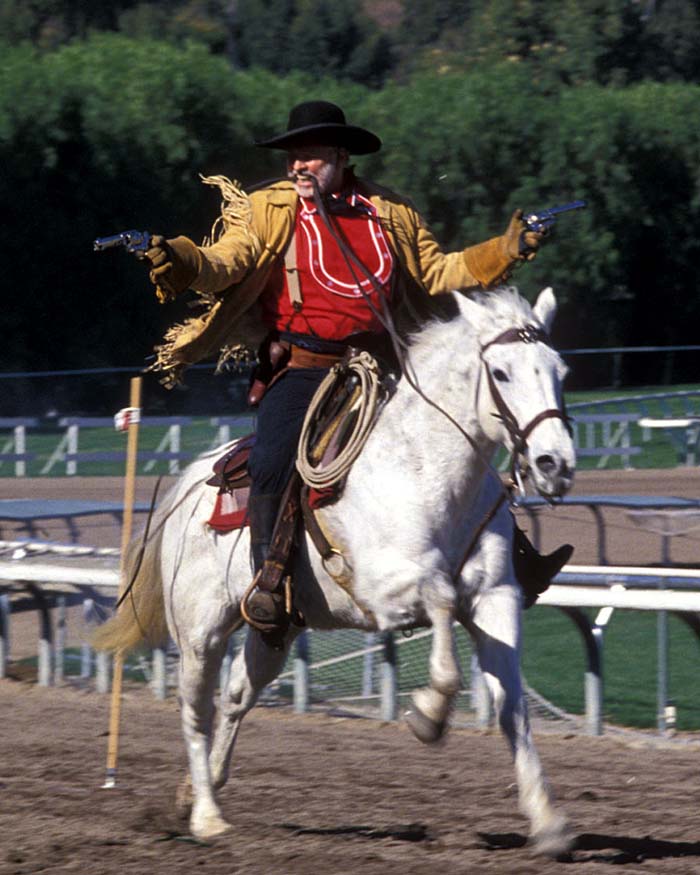 “If Colt Single Actions are your game, then Peacemaker Specialists should suit your pistol! I’ve dealt with Eddie Janis for years, and have found his sixgun work to be right on target!” 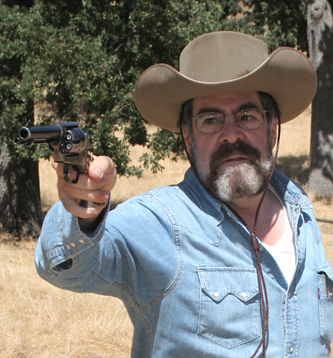 “I was so impressed with Eddie’s work, I sent him a first generation 45 of mine. I doubt if this gun shot as well when it originally came from the factory back in 1907. The result of this mastery is that 5 shots went from a four inch spread to a two inch group.” 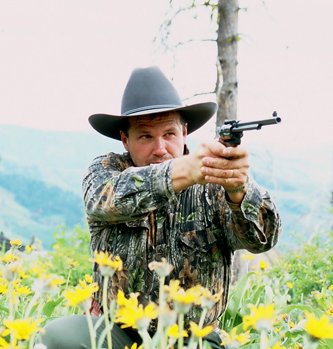 “Peacemaker Specialists provides the finest over-all work on Colt Single Actions I have ever seen. This includes restoration, finishing, barrel fitting, chambering, tune and time or general repairs. And I have compared Eddie’s action jobs with other well known, industry names and his are simply the best! Their perfect feel will flat spoil you! Naturally my favorite Colts, the ones I use the most, have been customized by Eddie Janis.” 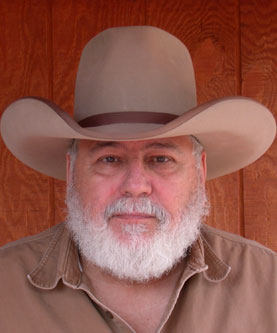 “A Colt Single Action that left the factory in near perfect condition in 1907 now found itself in need of a major overhaul 90 years later. It was sent off to Eddie Janis along with a new .44 Special barrel I had on hand saved for just such a project. Several new parts were required, a new cylinder pin and bushing, a new mainspring, a few screws, an ejector rod and spring, and a .44 Special cylinder. The new cylinder and barrel were installed with minimum barrel clearance, an oversize cylinder bolt removed all play in the cylinder. Over nearly a century of use both the trigger and hammer notches had worn considerably and these were both welded up and re-cut. In the process the action was tuned, the trigger pull set at 3 1/2#, and all internal parts totally smoothed in what Janis calls his Gunslinger Deluxe Package.“When the 7 1/2” .44 special arrived back home, I was in Single Action Heaven! The action is smooth, the cylinder is tight, the trigger pull is clean and crisp. When it comes to Colt Single Actions, Peacemaker Specialists can handle practically anything from the simplest parts request to a total action job to remarking the barrel and beveling the face of the cylinder to making a new Colt look 100 years old to total rebuilding. I recommend them highly. For less than the cost of a new Third Generation Colt Single Action Army,which by the way cannot now be had in .44 Special chambering, I have a “New” Colt that is as close to perfection as any Single Action Army can be. 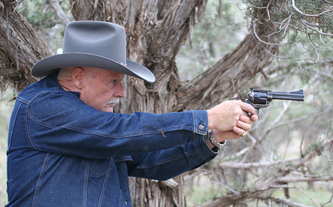 “I bought my first Colt Single Action Army in 1957. I’ve owned and sold between forty and fifty of them since. I’ve had a number of these repaired over the years and have done a fair amount myself. In addition to owning these Colt’s, I’ve tested and written about more than a few including a half-dozen custom Colt Peacemakers built by Eddie Janis of Peacemaker Specialists. Eddie’s magic with Colt SAA’s is unsurpassed. He even helped me bring back a superb historical old west Colt with the correct hammer he had in stock. When I need work done on another Colt SAA, I’ll call Eddie.”